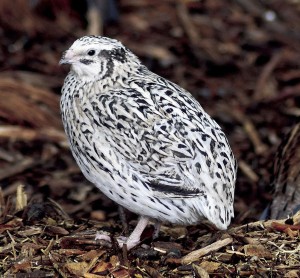 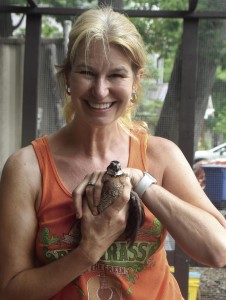 A group of quail were set free to roam the B&B’s 30 acres along the Galien River as part of an ongoing effort to take action against Lyme disease, which is spread by ticks that the birds devour.

Inkeepers Julie and Eric Haberichter have been raising the native quail since they hatched in incubators last February.

“We’ve never done this before – there’s no game plan,” Julie said before the skittish quail were herded out of their coop to freedom.

It took a while to get all of the Bobwhites out the open door, but once the initial pair of pioneers ventured out, the rest followed bit by bit (some carried by human helpers, with the flighty last one a true challenge to catch). Once outside many gathered around the edge of a ravine, sometimes calling to each other (not the namesake “bob-white” song, although Julie said she had just begun hearing it before the release day).

She said Bobwhites main defense against predators involves suddenly “thrushing up” suddenly and then gliding away.

While they were growing up in the coop, Julie said the quail displayed some unique behavior.

“Everything I read said they will not perch – they’re on the perches all the time. We’re going to make a ton more perches so they have more places to play.”

Attempts to plant some grasses and cover plants for the Bobwhites all met the same fate – “They ate them.”

The Goldberry Woods Bobwhite Quail project was inspired by the ongoing efforts of field biologist Eric Powers to release the native quail in Long Island which began in 1999 and soon led to a drop in the observable number of ticks.

Two male and 12 female Bobwhites will remain in an enclosure at the B&B, located at 9902 Community Hall Road, to provide eggs for breakfasts.

There also are four Celadon Coturnix Quail at Goldberry Woods. The eldest, hatched and raised with the Bobwhites, has earned the nickname “Mommy” (Julie said she “talks” and seems to like being picked up by people).

Haberichter said only one of the first 12 Coturnix eggs hatched. Replacement eggs were sent and a dozen of those hatched, but unlike ”Mommy” they were not welcomed into the Bobwhite flock.

Celadon Coturnix Quail are not native to this area, and the three females are already are laying their signature tiny blue eggs for meals at the Inn.

Whether they will join “Mommy” with the remaining Bobwhites (only two males were kept since they seemed to be the most aggressive and may have to be separated from the rest) remains to be seen.

“Within five minutes they’re being chased around the coop (by the Bobwhites),” Julie said.

She said the plan for 2022 is to borrow additional incubators and raise about 700 quail for a mass release.

‘We’re going do a whole bunch at once, raise them once, release them at once,” she said.

An aviary for the ducks and chickens that call Goldberry Woods home is taking shape next-door to the quail coop.

Julie said ducks and chickens can co-exist, but neither are compatible with quail.

Goldberry Woods also has a air-conditioned market stand camper that is open to the public that offers plants, produce, rainbow nature hunt cards for kids involving highlights of hikes on the property, and some free U-pick opportunities involving blueberries and raspberries that are grown there.